Stage is set for SCB Hall of Fame Classic

Stage is set for SCB Hall of Fame Classic 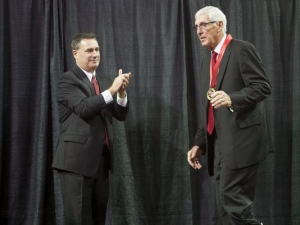 It was a ‘Murderer’s Row’ of former small college stars — Jerry Sloan, Earl Monroe, Dick Barnett, Travis Grant, Bob Hopkins, Lucious Jackson and John Ebeling. Not to mention Jim Naismith, the grandson of the game’s founder, who was there to accept the honor on behalf of James Naismith.

Each expressed gratitude toward hall of fame founder John McCarthy for helping raise awareness about a level of play often stigmatized by many. The seven inductees shared stories about how their playing days at D-II and NAIA colleges prepared them for life after college – in some cases – better than D-I has done in today’s generation.

A banquet Thursday night at the Ford Center further set the stage for the SCB HOF Classic, which tips off Friday afternoon with a top-five, D-II matchup between No. 3 Bellarmine (1-1) and No. 5 Alabama-Huntsville (2-0). The tournament concludes Saturday night with a regional rivalry renewed — at least temporarily — between two programs with national championship pedigree in Southern Indiana (2-0) and Kentucky Wesleyan (2-0).

For November, USI head coach Rodney Watson believes this is as big a stage that there is for D-II.

“I’m not sure (our players) fully grasp the significance of playing this weekend,” Watson said. “At our level, this is like being at Madison Square Garden with Duke, Kansas, Michigan State and Kentucky (in Tuesday’s annual Champions Classic). It’s the same significance for our level. For me, it’s exciting. For our players, they’ll understand it when they get there.”

No. 2-ranked Lincoln Memorial (2-0), the 2016 national runner-up, and Florida Southern (1-2), the 2015 national champions, round out the field of six teams to each play two games per day. USI, which is coming off an impressive win against Ashland – a NCAA tournament team last season – will open the classic against Florida Southern at 8:30 p.m. Friday.

“They’re very fast-paced,” Watson said. “They try to hit pretty quick on shots and full-court press anytime the ball is on the baseline or sideline out-of-bounds. We’ll have to be ready for an aggressive team.”

While there are two top-five showdowns – the other being Lincoln Memorial vs. Alabama-Huntsville at 3:30 p.m. Saturday – the most anticipated game will be USI-KWC. The former Great Lakes Valley Conference rivals have not played since 2013 when the Eagles swept a home-and-home in the first year the Panthers moved to the Great Midwest Athletic Conference.

The short discontinuation of the rivalry has upset both fan bases since the two are less than an hour apart. Watson, who has downplayed calling it a rivalry anymore since they’re in separate conferences, said he hopes the two programs can continue to play each other in this tournament.

“The disappointing part of a great rivalry in college basketball is that it seems like rivalries only happen in January and February that lead to March,” Watson said. “We can’t necessarily control the conference situation, but it’s going to be an exciting game between two storied programs.”

KWC fourth-year head coach Happy Osborne said he would like to keep playing even without the tournament.

“Without a doubt, we want to play. … We’ll play anybody that will play at Kentucky Wesleyan,” Osborne added.

USI will be without senior guard Bobo Drummond this weekend. KWC is also battling injuries and down to just seven scholarship players.