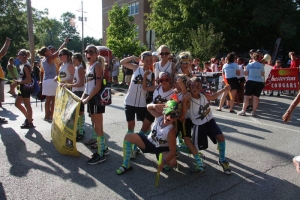 Starting next week, 8,000 people will be flooding the Tri-State for the biggest sporting event Evansville has ever hosted.

Now before the 225 teams hit the diamond, they will march right down Main Street to kick off the 2016 NSA Girls World Series.

Over 4,000 hotel rooms booked, over $2 million dollars in an economy boost is expected for the city.

Opening ceremonies for the 225 teams begins on Monday when Main Street will shut down starting at 5 p.m. The teams will march down Main Street for a parade, followed by a block party outside the Ford Center lasting until 9 p.m.

The tournament is spread out across Owensboro, Newburgh, and Evansville.

Details: The parade marches down Main Street and leads into the Ford Center for the Opening Ceremonies.