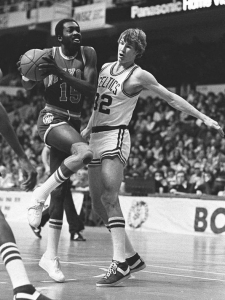 But he still remembers his first-ever attempt in college — for Winston-Salem State University in 1963. It was blocked by Lucious Jackson of Pan American College.

On Thursday, Monroe and Jackson will meet again, this time under friendlier circumstances. Both will be in Evansville for their induction into the inaugural class of the Small College Basketball Hall of Fame.

The ticketed banquet will take place at the Ford Center at 6 p.m. and honor 11 players, three coaches and one contributor – Dr. James Naismith, the inventor of basketball. Monroe’s college coach, Clarence Gaines, and Evansville’s legendary coach Arad McCutchan will also be recognized.

Monroe is looking forward to seeing Jackson and former Evansville College star Jerry Sloan, who will also be inducted. Monroe joked that Winston-Salem State “took a lot of beatings” from Sloan and the Purple Aces.

“It’ll be great to see these guys and converse with them and just be around,” Monroe said. “The game of basketball is such that it imposes a camaraderie that supersedes a lot of things in other occupations. And those things last throughout the years.”

John McCarthy officially launched Small College Basketball, Inc. in October 2015. He wanted to recognize the impact of the sport at the more than 1,100 non-Division I, four-year colleges. NCAA Division I, which has 351 men’s basketball programs, gets the lion’s share of the attention with a fraction of the contributors, McCarthy said.

“We’re not Duke, Kansas, Kentucky, etc., because we know our place,” McCarthy said. “But we also recognize that there are so many people who have done so many great things for our game over the history of college basketball, and I wanted to create a platform to serve them and be their voice.”

In addition to the Hall of Fame induction, the inaugural Small College Basketball Hall of Fame Classic will take place Friday and Saturday at the Ford Center and feature some of the top programs in NCAA Division II. There will be three games each day, featuring No. 2 Lincoln Memorial, No. 3 Bellarmine, No. 5 Alabama-Huntsville, 2015 national champion Florida Southern, Southern Indiana and Kentucky Wesleyan.

McCarthy said Evansville is an appropriate setting to launch both the Hall of Fame and what will become an annual Division II tournament.

“It’s a hotbed for basketball in general, and we were looking for a place that would embrace it: where basketball is important and where, frankly, basketball at our level – the small-college level – is important,” he said.

USI has added to the Division II legacy, capturing the national title in 1995 and finishing second in 2004.

This week will mark a full-circle trip for Monroe. He capped his college career by winning the 1967 College Division national championship in Evansville – the cherry on top of a senior season in which he scored 41.5 points per game and was named the national player of the year.

And even though he went on to bigger things – an NBA championship, four all-star appearances and an induction into the Naismith Memorial Basketball Hall of Fame – Monroe still looks back fondly on his college years.

“It wasn’t about making money, it wasn’t about blowing up in the national papers,” Monroe said. “You played with guys who you roomed with, who you lived with for three or four years and your aspirations were their aspirations. So, finally winning a championship together, it was like the culmination of it all and it was a great feeling.”

All events at the Ford Center